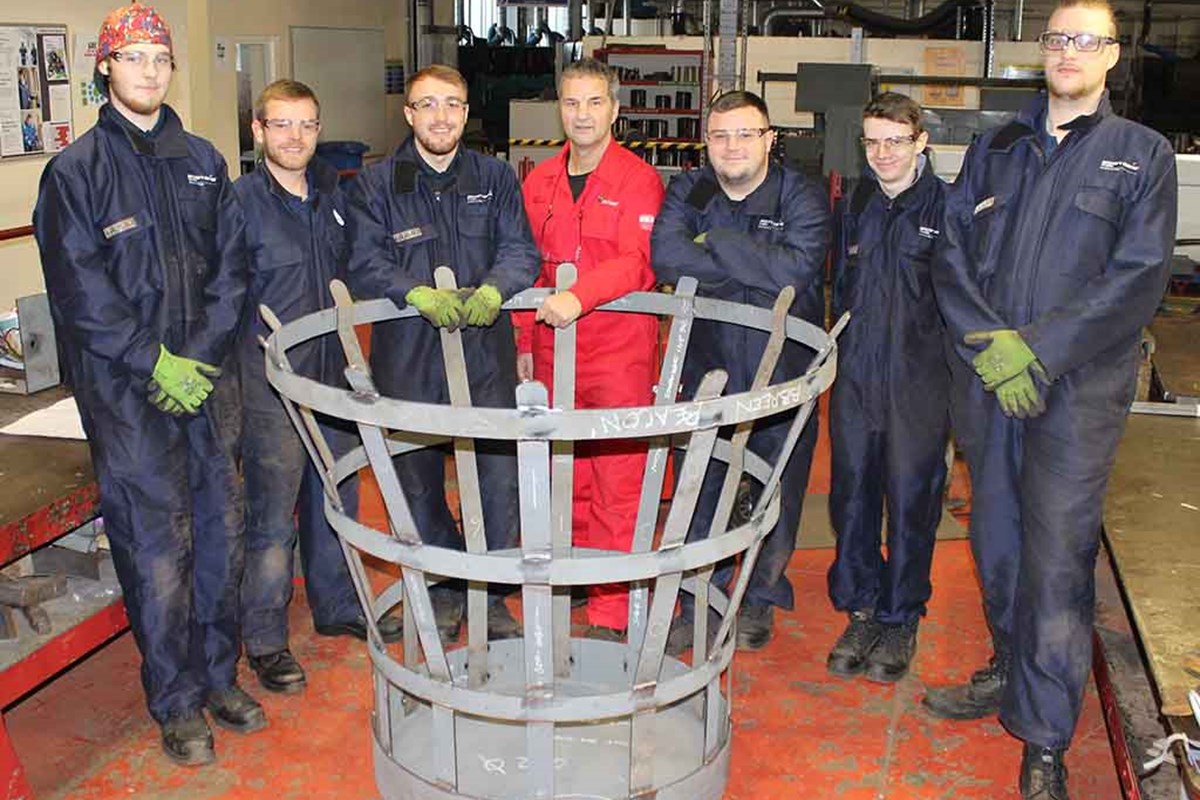 Babcock Modern Apprentices pictured with their Beacon of Light which, once completed, will form part of an international tribute to the millions who gave their lives in WW1.

Six Babcock Modern Apprentices, who study at Fife College’s Rosyth Campus, are using their talents to create a special ‘beacon of light’ which will be lit as part of an international commemoration, ‘Battle’s Over’ event, marking 100 years since the end of World War One. It is one of two beacons constructed by the Babcock Apprentices at Rosyth.

The Apprentices, who are all employed by Babcock International at Rosyth Business Park, have been enjoying working together on the project over the last few months and can’t wait to see their final beacon brazier lit and enjoyed by the community on Remembrance Day.

Organised by Pageantmaster Bruno Peek, ‘Battle’s Over’ takes place on November 11th 2018, with events throughout the United Kingdom, Channel Islands, the Isle of Man, and at scores of locations overseas.

Following drawings and designs provided by ‘Battle’s Over’, the apprentices, led and supervised by their lecturer Brian Breen, have carefully welded the 2 metre by
1.4 metre diameter beacon together using fabrication and welding skills that they gained during their apprenticeship training.

Once completed, the finished beacon will be mounted on a 6.2 metre wooden post and installed in the HMS Caledonia Navy Base on Hilton Road, Rosyth, to form one of 1000 beacons across the United Kingdom which will be lit as part of the spectacular remembrance celebrations.

Apprentice Jamie Aird, 23, from Galston in Ayrshire, has enjoyed working on the project and said: “It’s great to work on something real which will not only be used to commemorate the day, but will also serve as a permanent fixture in the community for many years to come. Knowing that we are making the beacon to mark such a historic occasion is also very special.”

Lecturer Brian Breen is delighted with the way that the apprentices have approached the project. Brian said: “This group of apprentices are a credit to the college and to Babcock, their employer. Throughout the planning and delivery of this project, their teamwork has been outstanding – especially during the perimeter welding of the beacon frame, where they had to work in sequence together and communicate in order to reduce distortion.

“Live projects such as this can be challenging but are extremely rewarding and enjoyable for all involved. Fife College is delighted to be supporting the apprentices to complete such a worthwhile project.”

Sean Donaldson, Managing Director of Babcock’s Rosyth site, said: “I’m extremely proud of our hardworking Apprentices who spent a lot of time and effort creating the special beacon of light to commemorate 100 years since the end of World War One.

“The beacon was one of two constructed by our Apprentices on-site, with the other beacon set to light up Limekilns Pier on Sunday.

“We are looking forward to seeing both beacons shine brightly on Remembrance Day.”

The apprentices will now prepare and put the finishing touches to their beacon before it takes pride of place at the ceremony on Sunday November 11th at 7pm.

Members of the public interested in attending the beacon lighting ceremony or any other commemorative events which form part of ‘Battle’s Over’ can find out more on the Battle's Over website.

Fife College is a leading provider of Modern Apprenticeship training, with the largest value contract in Scotland. For further details about opportunities, for students and employers, visit our apprenticeships page or call 03442480115.